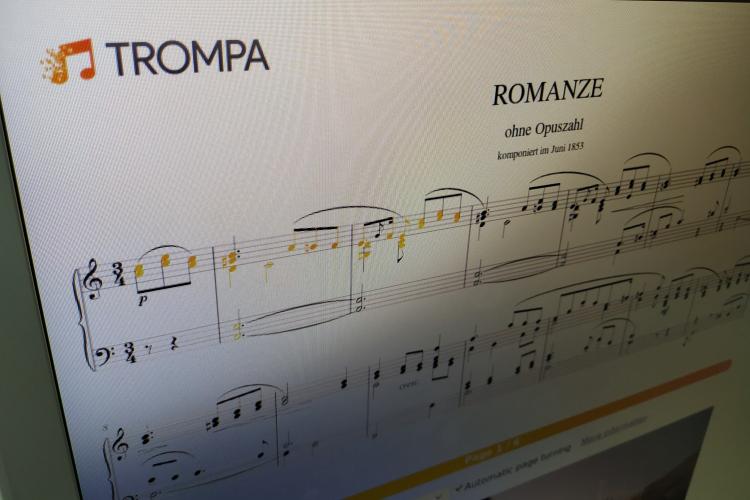 The prototype consists of a visualisation interface that displays the score rendered from an MEI encoding (available here!) using the open-source Verovio engraver, and highlights the notes as they are played by the performer – currently synchronised with several available rehearsal recordings (videos) underneath the score, although we are working on a version for musicians to use in real-time during rehearsal. Performance-to-score synchronisation is done using the "Symbolic Music Alignment Tool" by Eita Nakamura.

The underlying TROMPA alignment data model, built upon the Music Encoding and Linked Data (MELD) framework, combines bibliographical, structural, and performance-related metadata with audio feature descriptions and user annotations, allowing instrumentalist's rehearsal recordings and rehearsal notes to be incorporated within a wider Web of data, e.g. for reuse by music scholars and enjoyment by music enthusiasts – pending performer permission of course! Friends of RDF can explore the Linked Data backing up this prototype (in JSON-LD format) by starting at this specification of rehearsal renditions and following your nose!

This prototype, developed at the University of Music and Performing Arts Vienna (mdw), works toward the broader TROMPA aims of interweaving and enriching public-domain music archives for scholarship, performance, and enjoyment. We will be demonstrating a live version of this prototype for real-time rehearsal use at this year's ISMIR late-breaking/demos session.