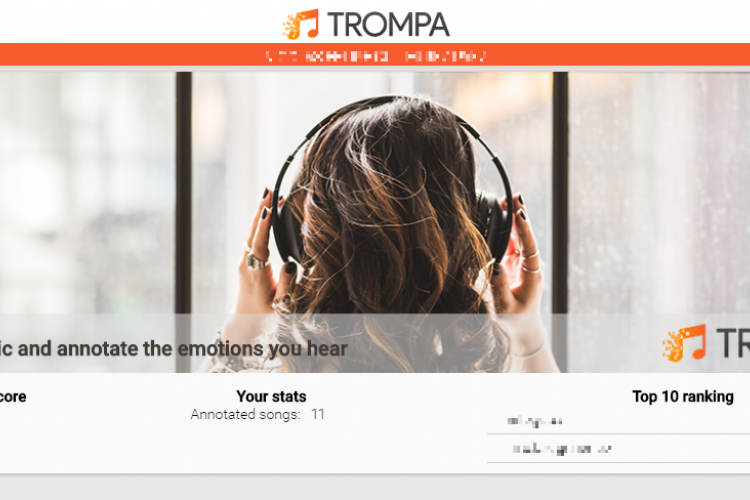 During the last six months, we've focused on refining the requirements and goals of the pilot to attract more contributors. We've done multiple workshops to evaluate the usability and users' perception of different demos.These workshops allowed us to refine the workflow of the application, and to include new features to engage users.

On October 5th and 6th 2019 we organized a workshop in Maker Faire Barcelona, where a first version of the prototype was presented as a tool to support research in emotion recognition in music. The workshop aimed to highlight the importance of massive involvement of persons in tasks such as collect training data and evaluate the results of designed algorithms.

A second version of the prototype was presented during a workshop with highschool students in the context of the Barcelona Science Week on November 12th 2019. During the session, some features identified by science to objectively classify and identify emotions in music were presented, highlighting the importance of music enthusiasts involvement to improve current knowledge and technologies.

These workshops highlighted the importance of having a good user management system to provide valuable feedback to the users as well as to provide better recommendations in future versions.

The last version of the Music Enthusiasts app is presented as a novel way to explore and discover new music (classical and popular) based on the emotional content. Users are asked to contribute with annotations about perceived emotions in music to obtain recommendations according to their preferences. At the same time, gamification elements are included in the application, such as the annotation score and a global user ranking.

Currently, we are integrating the Contributor Environment in our application to access useful metadata of musical pieces, as well as to provide new data based on users annotations. The Multimodal Component designed by Videodock to explore CE content will provide an interface to add musical pieces to new annotation campaigns.

In the following weeks, we plan to run multiple annotation campaigns for users to interact with the first working pilot. Our first campaign will be launched to the UPF community (with ~10000 students, see: https://www.upf.edu/web/plaestrategic/upf-in-figures), where we plan to collect multiple annotations and test the effect of the engagement mechanisms such as music recommendations. Following campaigns will be open to all audiences!